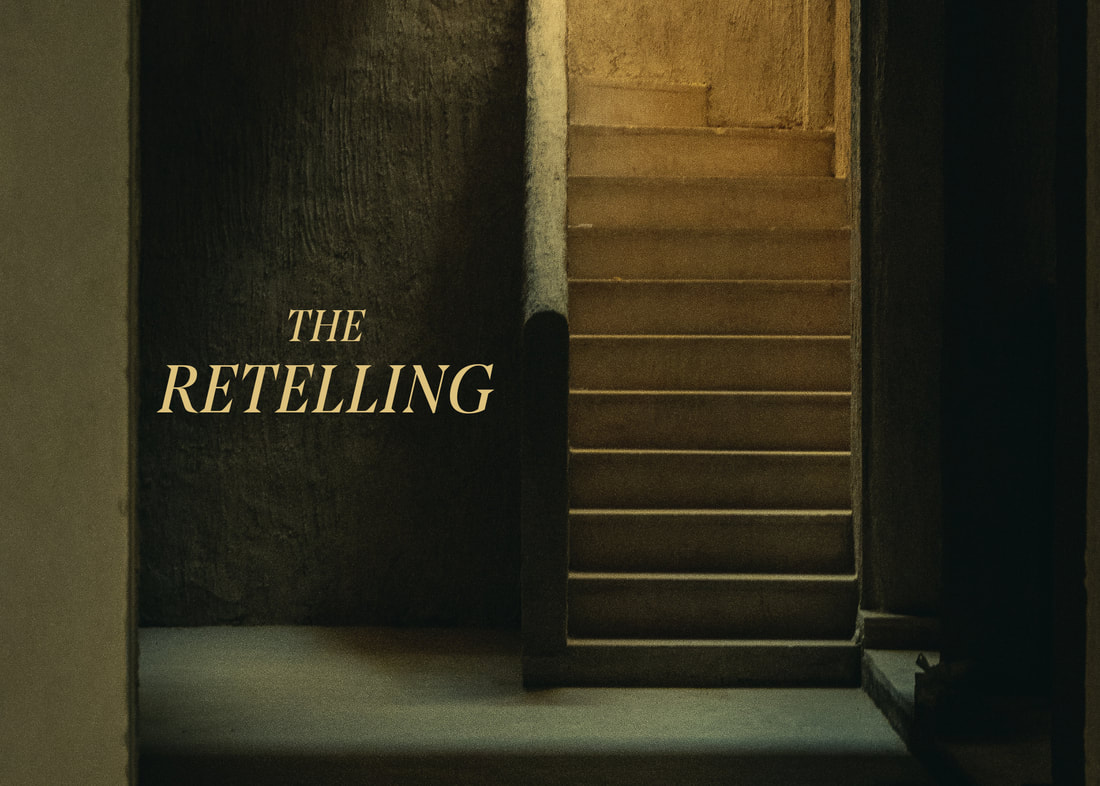 Friday, 10/30 - 6:00PM
Saturday, 10/31 - 6:00PM
Three strangers are held captive in a basement forced to play a role in The Father's twisted game. Tensions rise when they learn one of them will be sacrificed for a new victim to take their place. The strangers must decide whether to follow the rules, play their own game, or leave things to chance. Only two can survive. Who will be left behind in The Retelling?
​
Viewer Warnings
Violence/murder

Laurel Armstrong (Leah)
Laurel currently resides in the Twin Cities where her primary focus as an actor/singer is on new work. Laurel’s live performance work has taken her all the way from Osaka, Japan, to her kitchen table. She has also done a bit of producing, writing, and directing in the realms of sketch comedy and innovative multidisciplinary work. Through this she discovered her love of organizing creativity, nurturing others’ talents, and having people do what she says. Laurel began doing voice-over almost 15 years ago reading online instruction manuals for a small company in Provo, UT. Since then, her clients have ranged from international corporations like Target, Nestle, Verizon, and 3M, to educational companies and local non-profits like the Jeffers Foundation.

Cam Pederson (Jacob)
Cam Pederson is a Twin Cities-based Actor, Designer, Drag Queen. He holds a BFA in musical theatre from Minnesota State University, Mankato, where he had the opportunity to work on his dream show as the titular role in Hedwig and the Angry Inch. He made his Twin Cities debut at Lyric Arts Theatre in the regional premiere of Bright Star as "Billy Cane." Then, almost, "Nick Cricker"/"Durdles" in The Mystery of Edwin Drood, which due to COVID-19 was canceled the day of opening night. Other credits include Harry Houdini (Ragtime), Seymour Krelborn (Little Shop of Horrors), Christopher Wren (The Mousetrap), and Clopin (The Hunchback of Notre Dame).
CamPederson.com | @TheOfficialCam1 | @TheLunaMuse

Madeline Kvale (Stage Reader & Dramaturg)
Madeline is a wandering arts administrator and Dramaturg. Currently found in Duluth, Minnesota, she joined the team of Market Garden Theatre remotely in 2018. She has created theatre in places as far-flung as the Weston Playhouse Theatre Company in Vermont, to Burning Coal Theatre Company in North Carolina, to the Guthrie Theater in Minneapolis; all experiences a whirl-wind of artistic excellence that continue to inspire. As a theatre maker devoted to community engagement and reflection, she is drawn to stories that speak to our communities today. Most recently, she stage managed 7th House Theatre's production of Rhinoceros, and made her film PA debut in Lauren Keating’s POWER OUT. Madeline has degrees in Theatre Arts, Sociology, and German from the University of Minnesota, Morris.


Alayna Jacquline (Playwright)
Alayna Jacqueline is a Minneapolis-based playwright, born and raised in Buckeye Nation (Columbus, Ohio). She’s an instigator for new plays with the Twin Cities Playwright Cabal. In her absurd experimental writing, she loves finding new ways to bend, reshape, and deconstruct stories for the stage. Alayna’s work has been performed and/or developed at Theater Mu (MN), Phoenix Theater (MN), Market Garden Theatre (MN), Rennasaince Theaterworks (WI), Playwrights’ Center (MN), MadLab Theater (OH), Lincoln Theater (OH), Pythian Theater (OH), and Haybarn Theater (VT). Her All of the Everything was produced at the 2019 Samuel French Off-Off Broadway Short Play Festival. Last fall, she completed a writing residency at the William Inge Center. She earned her BA in theater from Otterbein University and her MFA in creative writing from Goddard College.

Simon Sperl (Composer)
Much of Simon's music is meditative and poignant but can also be full of jubilation and energy; sometimes even teetering on cacophony. His music tends to focus on large themes such as religion’s role in poverty cessation, toxic masculinity, and being present to the miracle of existence. Simon is the Founder and Executive/Artistic Director of the Not Yet New Music Choir. An organization that professionally records composers' choral music (for free!) while helping them build a foundation of community support. Simon's recent projects and accomplishments include Dracula, a ballet commissioned by the Twin Cities Ballet Company (set to premiere in March 2021 at the Fitzgerald Theatre in Saint Paul), Even in Darkness; a piece commissioned by Lumina Women’s Ensemble with lyrics by Nobel Laureate and Holocaust survivor Elie Wiesel (translated into English by Marion Wiesel (Elie’s wife)), winning "Best in Fest" at the 2019 Film Score Festival for his score to the short film Snack Table, and being a finalist for the 2020 Minnesota Emerging Composer Award.

Lucas Skjaret (Director)
Lucas is a theatre director, costume designer, and teaching artist in the Twin Cities. As the Artistic Director of Market Garden Theatre, he has directed Another Revolution, My Barking Dog, Gray Duck, Three Days of Rain, On The Exhale (featuring Jane Froiland) at the Minnesota Fringe, the world premiere of Keith Hovis’ Public Exposure, and a staged reading of Ghosts & Zombies. With his colleagues, he also co-produced and directed readings of three new plays for MGT’s newest program, Fresh Roots Series. He most recently has directed both Mulan Jr. and High School Musical with Young Artists Initiative. He has also worked with The History Theatre, Little Life Boats, Park Square Theatre, Artistry, Yellow Tree, Walking Shadow Theatre Company, Freshwater Theatre, DalekoArts, Theatre in the Round, Minnesota Musical Theatre, The Public Theater of Minnesota, and Teater Neuf in Oslo, Norway. Lucas received his double B.A. in Theatre Arts and Scandinavian Studies from the University of North Dakota where he studied Norwegian culture and Ibsen in Oslo, Norway, and did research at The Ibsen Centre. He is a proud associate member of the Stage Directors and Choreographers Society and of the Literary Managers and Dramaturgs of North America. www.lucasskjaret.com
ALL SHOWS PYWC. YOUR PAYMENT IN ANY AMOUNT GRANTS YOU ACCESS TO TCHF IX.