​An artist-centric organization, TCHF strives to maximize both audience entertainment and payout to artists. In 2019, TCHF issued more that 3,000 tickets during its 11 day run, and paid 100% of individual and punch pass ticket sales to participating artists.

Four Humors Theater launched the festival in 2012 as a juried, horror- themed, live-performance arts festival spanning the two weekends surrounding Halloween. In 2014, several artists and producers -- many of whom were involved with the first two seasons -- formalized their commitment to continuing TCHF by forming United Festival Group, LLC, which oversaw festival operations for 5 years. In the summer of 2019, TCHF transitioned its organizational structure to become a 501(c)(3) non-profit organization. 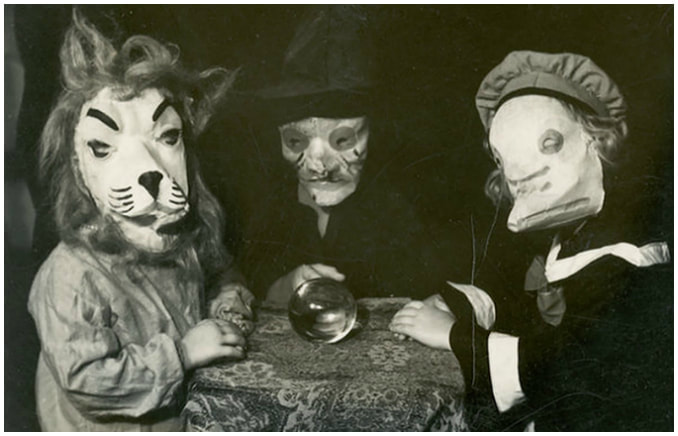 The producers of the Twin Cities Horror Festival (TCHF) have been asked on a number of occasions, “There are so many horrible things happening in the real world, why show pain and suffering on stage?”
​
Horror is a very broad term. It seems simple, but the definition is slightly different for everyone. For some, horror is murder, blood, and gore: visual sensory overload. For some, it is pure fright and the unknown: a jump-scare from an expected place, something startling that raises your heart rate. For others, it is helplessness and dread: the inevitable that is moving toward you, either physically or psychologically, relentless and uncaring. For almost everyone, it is something in the darkness, something unseen, something nebulous. Horror is death, or such pain that you would wish for death.

“That all sounds awful. So why do it?” you may ask.

It is easy to deflect the questioner with a statement regarding personal entertainment choices. Not everyone wants to see a romantic comedy, or a classic ballet, or Eugene O’Neill’s plays on stage. There is a market for those who choose horror as entertainment. We have an audience that enjoys it.

Depicting horror also is an artistic challenge. Every production hinges on its script, acting, and technical elements, but the stakes are higher when producers are trying to elicit the raw, extreme, and personal reactions associated with fear. The producers of the TCHF thrive on that challenge.

“”But why?” you might ask, more emphatically this time.

We will all die someday. It is the only certainty of life that your physical body will fail, and you will die. What may or may not happen after death is open to personal belief, but medically, scientifically, we know what death is: inevitable.

“So you show horror on stage so people come to terms with their own mortality?”
​
Sure- we’ll start there. We think coming to grips with your own mortality and  understanding yourself will make you stronger. Your strength also may help someone else, even if it is only helping them understand their own mortality. That will help them appreciate their life and the lives of others.

That’s one  answer. But there are many others.

Horror teaches empathy and allows us to “practice” the feelings of fear and terror, so when we are faced with those situations, we are not in uncharted waters. For those of us who have experienced terror, it also validates those feelings that the world isn’t always sunshine and rainbows.

Horror builds a community. One of the reasons that people started banding together in the first place was that the world was a scary place. We think that maybe we lost something when we were no longer sitting around  the fire, with a dark and scary world waiting to devour, drown, crush, or otherwise end our lives. This banding together in a place of fear, even if it’s fiction- this is one of the building blocks of human togetherness.

Creating horror makes you analyze the crafting of fear.  So many of the “higher powers” in the world rely on fear to keep us in check, and manipulate us. By creating work that demands us to scare people, we begin to break down the tactics so often used against us.

Horror demands the exploration of the unknown and terrible. It’s easy to look away from the parts of our life and world that we do not like. Horror doesn’t allow such omissions- it forces us to dig deeper, even when we don’t want to. And, it allows us to do so with an imagination and explorative spirit.

We depict horror on stage because we know it is fake. The pain and deaths are not real. We have control. We know life is precious. It is not to be wasted. We also know the human experience is a complicated one full of wonderful and terrible things.

​We want to learn something about ourselves.