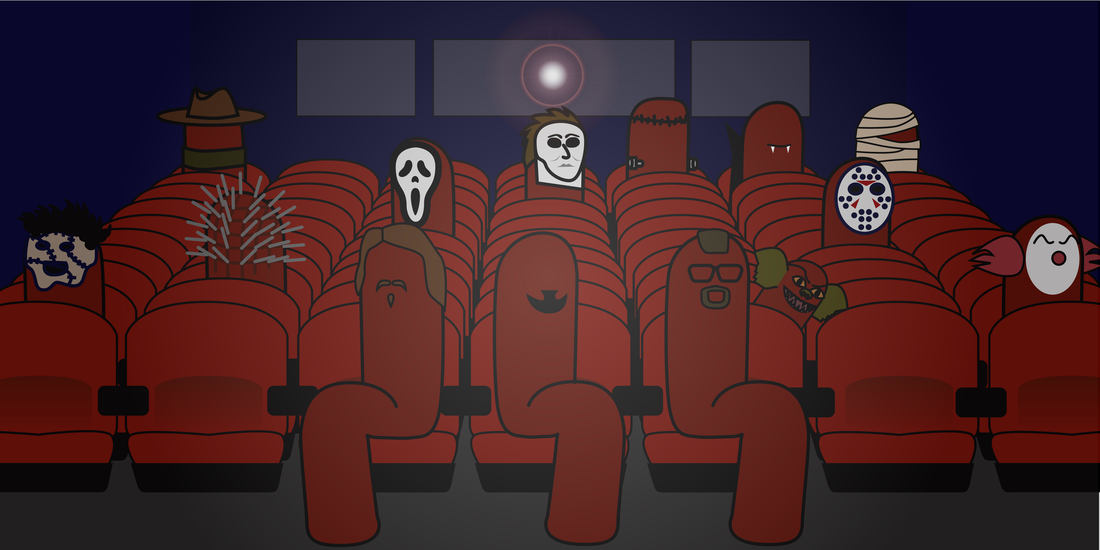 These shorts cut terror to the bone, delivering bite-size versions of horror movie scares. This year we’ve curated films from 12 different countries, across all subgenres of horror, from black comedy to animation. Each night’s programming is completely unique – come and vote for the audience favorite award. Who will win the Golden Frankfurter? See below for each night's programming.

NIGHT 1
Right Place, Wrong Tim - directed by Eros Vlahos
a 90’s British Sitcom gets taken over by clones of the lead actor and descends into chaos. Starring Asa Butterfield, Ella Purnell & Adam Buxton. Produced by Eros Vlahos, Honey Ross, Dom Santry, Bill Milner & Maisie Williams. Written & Directed by Eros Vlahos.
Le otto ditta de la morte - directed by Frédéric Chalté
Followed by a mysterious stalker dressed in a motorcycle suit, Lisa seeks the security of her old family cabin. Unfortunately, she can’t escape her dark memories.
Night Crosser - directed by Kevin T Landry
A strange Romanian trying to enter Canada is confronted by an overzealous custom officer and his strangely cooperative colleague.
Madder Isle - directed by Laura Spark
In a poisoned sea, on a forsaken rock, a holy sect seek to bring about a new era, but Morgan discovers their intentions are not wholly pure, and there's more to the Island than rocks and mud…
Granny - directed by David Burrowes
Donny loved his Granny and Granny loved her Donny... until one stormy night when it all changed.
Prey - directed by Bill Whirity
While on a first date, a young couple finds themselves pursued by more than just each other. Starring: Jacob Zachar and Jessica Cook
Pie - directed by Adria Tennor
Pie is dark comedy about a woman who invites her friend over for homemade pie and coffee and after much prodding divulges its special secret and scandalous ingredient. It’s Sweeney Todd meets Thelma & Louise via Stepford, CT.

NIGHT 2
The Blue Door - directed by Paul Taylor
A district nurse, played by Gemma Whelan (Game of Thrones, End of the F***ing World) is assigned a new patient living alone in a dilapidated bungalow. The nurse soon discovers that her dying patient and the home she inhabits are hiding a dark secret.
All You Can Eat - directed by Manuel Perez, Paulina Galindo
Tommy used to be a tiny innocent chick, but when he realizes that his ultimate goal as a living creature is to become a meal for humans, there is nothing else than to kill or be eaten.
The Gaze - directed by Ida Joglar
Mayra (Siri Miller), a young scientist, may have been sexually assaulted by her prestigious boss. When she retells what little she can remember from the night to her friend, she encounters the kind of doubt and suspicion that forces many women to stay quiet. Soon the experience causes previously unknown powers to bloom from within, to an explosive end.
Dual - directed by Justin Staggs
A child psychiatrist unwittingly unleashes the demonic fury of a troubled boy's "imaginary friends".
The Water’s Edge - directed by Nick Sneath
A dog walk along a lake takes an unexpected turn with a shocking discovery beneath the water's surface. Everything is not quite what it seems....
42 Counts - directed by Jill Gevargizian
Two unsuspecting victims spend their night off watching scary movies in an apartment rented from their boss... until they uncover something much more sinister than what they're watching on screen.
Who’s That At The Back Of The Bus? - directed by Philip Hardy
Alone on the top deck of the night bus, an old lady is haunted by an unlikely apparition.

NIGHT 3
The Bloody Ballad Of Squirt Reynolds - directed by Anthony Cousins
The kids at Camp Nawgonamakit are about to find out the tragic tale of Squirt Reynolds is more than just a legend.
Une Nuit a Londres - directed by Luc Simard
By a full moon night in London, a young lady called Victoria is being chased by the famous serial killer Jack the Ripper.
Besoin Dead - directed by Aurélien Digard
In a church, a future bride dresses in secret. Just before meeting up with her, the best man and the priest discover the city has been invaded by the living dead. They grab whatever weapons they can and go to her rescue.
Catcalls - directed by Kate Dolan
A man cruises around late at night looking for something. He pulls in to ask two young girls for directions - only to flash them to get a cheap thrill. Unfortunately, he has picked the wrong girls. They are also out hunting tonight and they will stop at nothing to get their kill.
Heartless - directed by Kevin Sluder
Based on Edgar Allan Poe's "The Tell-Tale Heart". An overlooked associate struggles
to complete a corporate presentation as a horrific secret gnaws at her conscience.
The Front Door - directed by Andrew Rutter
Upon locking the front door, Steven discovers some rather odd intruders.

NIGHT 4
The Monster Within - directed by Ghislain Ouellet
Since waking up from a coma, Jenny sees a wraith following her everywhere… and soon realizes that getting rid of it will come at a hefty price...
Salt - directed by Rob Savage
Remember. Stay inside the circle.
The Chosen Ones - directed by Dominique Loubier
When a woman feels trapped in her domestic setting, she turns to the supernatural for an escape; but her salvation comes at a price.
Milk - directed by Santiago Menghini
On a late night, a young teen goes into the kitchen for a glass of milk. Upon encountering his sleepless mother, he quickly realizes things are not as they seem.
There’s A Man In The Woods - directed by Jacob Streilein
At a small elementary school in North Carolina, colorful whispers of a man lurking in the forest near the playground frighten the children. Restlessness at recess draws the concern of their teacher, who is skeptical that the danger is more than just a juvenile rumor. The problem compounds as dismayed parents demand action from the educator and begin to lose trust in his ability to protect their children.
No One Will Ever Believe You - directed by Frédéric Chalté
It’s Halloween season and Lucy wants to prank her sister Maggie by giving her a good scare. However, Lucy is the one who’s about to be terrified.
Reprisal - directed by Mike Malajalian
A young woman becomes anxious at the news of the return of her husband who disappeared 30 years ago during the civil war.

NIGHT 5
A/S/L - directed by Benjamin Swicker
A married man gets invited to a young teenage girl's house over AIM and things aren't as they seem.
Limbo - directed by Mark Pragai
A  woman  trapped  in a trance  she struggles to  break. Chased by her  demon, in a house that  imprisons her. She faces against  her fears in a battle of predator  and prey in a struggle for control.  Can she break the spell, or will she  falter and fall further into darkness?
Dulce Hogar - directed by Giovana Olmos
In a rundown building, Susana, the doorkeeper, sets out to collect one tooth per apartment: the monthly rent. From the first floor to the highest balcony, the excruciating installment jeopardizes the safety and the housing situation of the lodgers.
Damage Control - directed by Ryan Oksenberg
While surprising his fiancée with a newly inherited property, a man is forced by a mysterious woman to confront his past behavior.
Beastly Things - directed by Zev Chevat
A young artist encounters a vicious group of local schoolchildren, and learns what beastly behavior truly means.
Midnight Delivery - directed by Nathan Crooker
MIDNIGHT DELIVERY begins when a mysterious gift is delivered to an unsuspecting woman’s door at the stroke of midnight. The woman’s morbid fascination entices her to examine the gift, unleashing a sinister evil from within.
Devil Woman - directed by Heidi Lee Douglas
An ambitious science student searching for an endangered animal gets bitten, and when loggers attack the camp changes overtaking her body become a threat to all sides.
Tickets