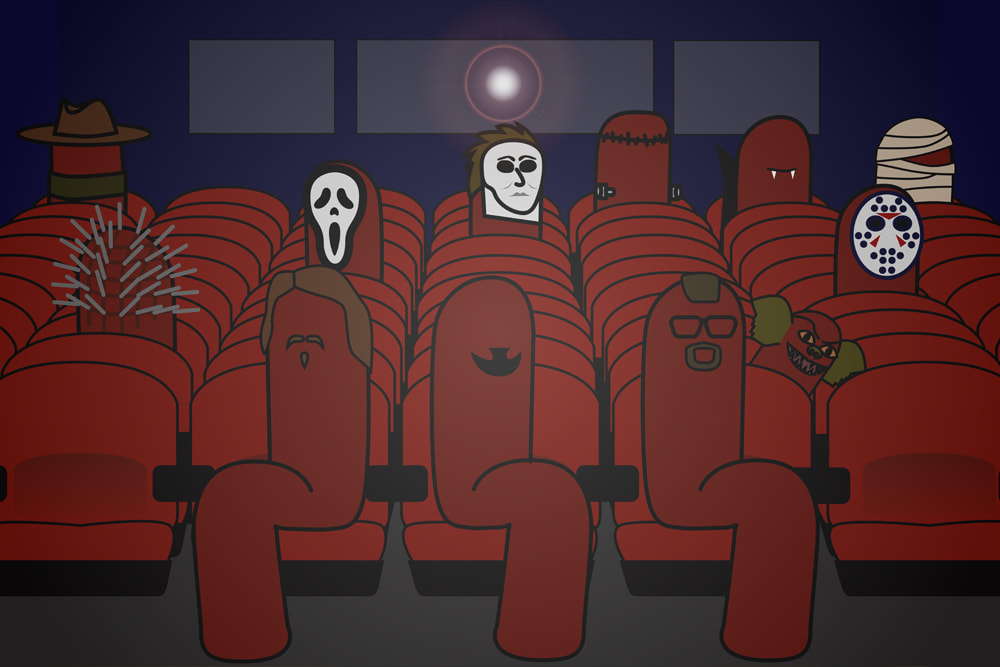 Some of the most exciting filmmaking in horror happens 5, 10, or 15 minutes at a time. We scoured the web, film festivals, and even unreleased shorts to bring you five hour-long blocks of our very favorites. These short films will make you laugh, chill your blood, turn your stomach, and might even provoke a tear or two.

Great Choice
Dir: Robin Comisar
​A woman gets stuck in a Red Lobster...commercial.

Too Dark
Dir: Sean Lahiff
A forest too eerie. A girl too vulnerable. A Predator too inept. A frightfully funny tale that's TOO DARK.

Father
Dir: Chris Keller
Danny, a 9-year-old boy, is sitting on his bed, drawing something. It is an unassuming scenario of an innocent child playing, except something is off... What is he drawing? Why does he look anxious? Why is the house so eerily quiet?

Mister Popular
Dir: Charlie Mayforth
Sid, the classic idea of the popular jock, is put-off by the attention he receives from Ben, an outcast obsessed with Sid's status as Mister Popular. When Ben takes drastic measures, his own shot at being Mister Popular makes for a twisted finish.

We Summoned A Demon
Dir: Chris McInro
They just wanted to be cool. Instead, they got a demon.

Taste
Dir: Adrian Selkowitz
Claire, a beautiful and calculating trophy wife, has convinced her husband to invite an influential Hollywood power couple to dinner. Things begin to go awry when the arriving guests step over a woman's naked body in the driveway. The arrival of the paparazzi leaves the group no choice but to bring this barely conscious woman inside. As Claire struggles to remain the consummate hostess we learn that the strange woman is no stranger at all but rather a ghost from her past – one she is bonded to in a strange and supernatural way

Kisses
Dir: Sean U'Ren
Two young boys walk home from school, discussing their problems with girls. After one is caught in a lie about sexual experience, a unique opportunity presents itself. This film is based loosely on my own thoughts about toxic masculinity and consent, and on my mom's wig models that she kept in the laundry room. They scared me for the better part of my childhood.

The Armoire
Dir: Evan Cooper
A struggling young woman moves to Hollywood only to discover that a piece of furniture in her apartment is haunted by a malicious spirit.

Earworm
Dir: Tara Price
Oh, the things that get stuck in our heads. When a reclusive man is repeatedly woken up over the course of a night by severe headaches, accompanied by musical repetition from an unknown source, his sanity begins to swiftly unravel.

Even The Darkness Has Arms
Dir: Chris Bavota
In the middle of the night, a man is haunted by the manifestation of his fears.

Caravan
Dir: Nathan Lacey
Caravan is a cautionary tale which follows a young family on a road-trip. As night falls the family pulls in for a routine rest-stop where their caravan is invaded by a malevolent intruder.

Worm
Dir: Ilya Polyakov
A lonely woman falls in love with her mysterious neighbor, only to learn he has a very deep, dark secret.

Lemon Drink
Dir: Will Goss
A young woman must come to terms with her boyfriend's odd personality trait.

Other Lily
Dir: David Romero
Lily suffers from a sleep paralysis that may have horrific implications on her waking life.

Rites of Vengeance
Dir: Izzy Lee
A trio of nuns take matters into their own hands when a priest commits a terrible sin.

Holiday Fear
Dir: Nicolas Payne Santos
In the final act of a slasher film, Bruce attempts to reclaim his manliness and impress the final girl by finishing off the killer.

First Like
Dir: Alexander Ronnberg
A girl comes home after a night out and is the first to press like at a picture a friend posted. Maybe she shouldn’t have done that…

The Birch
Dir: Ben Franklin & Anthony Melton
A bullied schoolboy takes drastic measures against his tormenter, summoning an ancient being in the woods using a spellbound book passed down through the generations of his family.

Blood Shed
Dir: James Moran
Jack loves a bargain. When he buys suspiciously cheap parts to build his dream shed, he and long-suffering wife Helen find they’ve got more than they bargained for: a killer shed with an appetite for blood. A comedy horror about a man’s twisted love for his shed… that eats people.

Connie
Dir: Cat Davies
Would-be stand-up Dolly Diggs suffers from stage fright. To overcome her fear, she plans to become a ventriloquist and thinks she found just the puppet to help. But Connie is no ordinary puppet… She’s a living doll

It Began Without Warning
Dir: Santiago C Tapia & Jessica Cutright
The time has come,' the Walrus said.  And all the little Oysters stood and waited in a row.

Clanker Man
Dir: Ben Steiner
Reality doesn't happen by itself. Terry Lothian works tirelessly to maintain the background details that we all take for granted. But with his department feeling the pinch of austerity cutbacks, it's not just the fabric of reality that's starting to unravel.